BACK 2 BACK AND THE BRIGHTEST NEW TALENT AT BE Featured 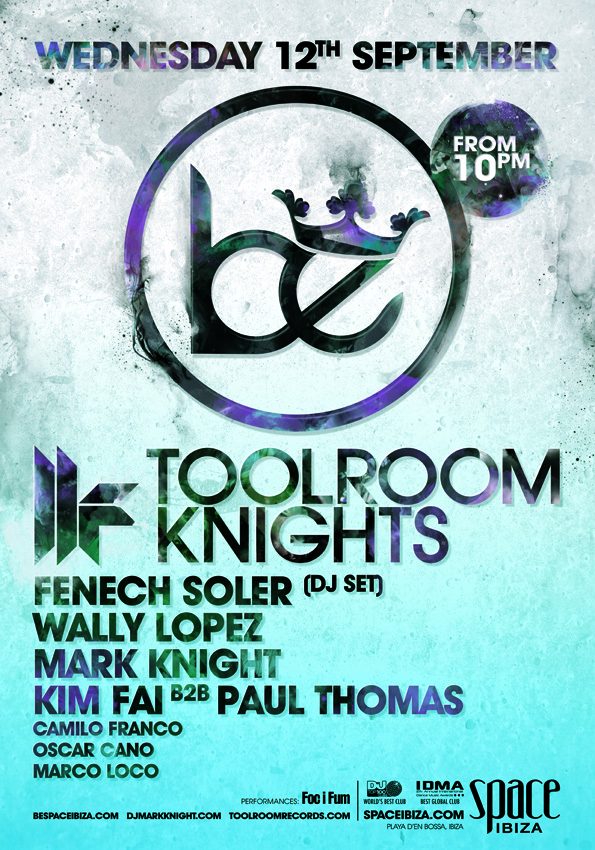 Leading the night at Space Ibiza where anything goes and clubbers can expect to hear nothing but the best hedonistic house music, Mark Knight proves once again he’s at least ten steps ahead of the rest.

Responsible for creating a great vibe and with the core ethos that everyone should just ‘be’ in partnership with Toolroom Knights, BE also showcases some of the brightest new talent alongside dance music’s stalwart leaders.

Wally Lopez makes an appearance this week despite a hectic schedule – including beginning courses for budding DJs. However, it’s guaranteed that the trend-setting king of house, euphoric melodies and an admirable fashion line will deliver a set with the usual evident passion and a constant need to feed the crowd whatever musical goodness they crave.

British band Fenech Soler is a name that the scene is watching intensely. This four-piece fully embrace their electronic indie rock tag completely with a genre-crossing sound that transfers effortlessly, whether it’s to a dancefloor or from the stage during live performances, like their recent and revered shows at many big summer festivals. With huge hits like “Stop and Stare” and “Demons”, these guys - Ross Duffy, Ben Duffy, Daniel Soler and Andrew Lindsay – are quickly shooting up the ladder of success and are currently engrossed in making their new album. The special DJ set they’re doing at BE this Wednesday night is sure to be spectacular.

Kim Fai b2b Paul Thomas is another eye-opener that you musn’t miss. Dubbed as one to watch and with a distinct talent of making body shaking music that will stay with you for days – just listen to ‘Kissing in Krakow’ - Kim’s tech-house with flashes of emotive melodies will envelope you before you can resist. Couple this with the house skills of Toolroom Records producer and worldwide resident for Godskitchen, Paul Thomas, and you’ve got a force to reckon with.

As usual, Space residents CAMILO FRANCO, OSCAR CANO and MARCO LOCO will also be on hand to look after all our loyal clubbers with their own brand of beats.